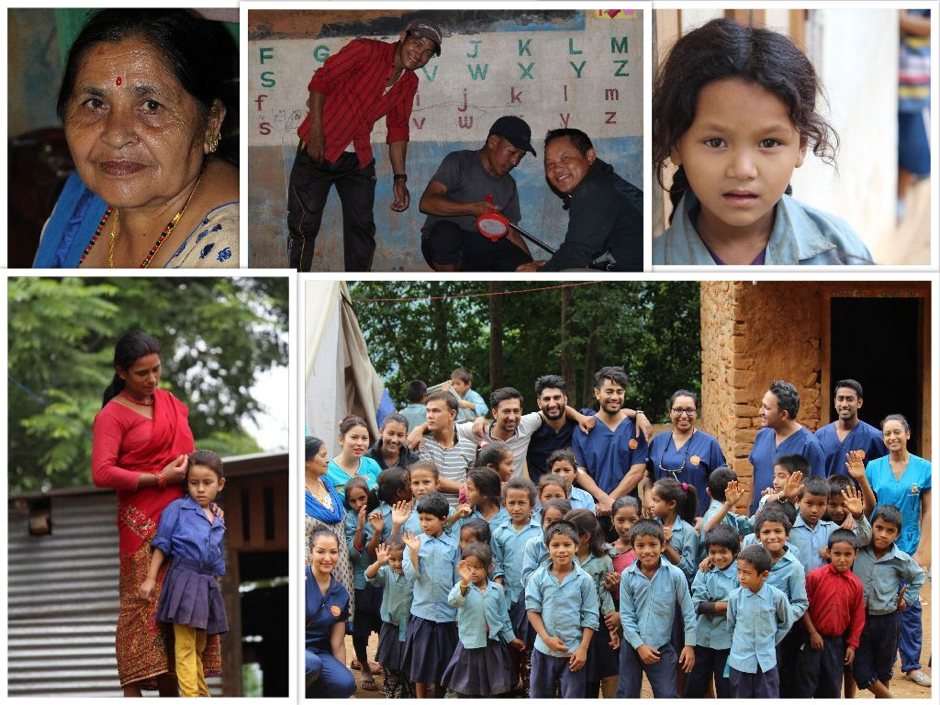 A team of professional hikers were brought in to the camp to provide catering services, as they do when leading tourists through the mountains. For the duration of the camp they would be making us breakfast, lunch and dinner. These were the best meals we experienced in Nepal!

Having started much later than anticipated on the first day, the second day felt extremely busy as we needed to pick up the pace. I was placed in a restorative clinic that day alongside Chantelle and was surprised to see how compliant the patients were with their first experiences of dental treatment, and mostly without local anaesthetic.

As we all got used to the bathroom situation we noted a ‘guardian’ of the facilities who was approximately 5 inches in diameter. She was named Charlotte and we figured that if she was on the web outside, at least her whereabouts were known. There was also an alleged ‘tarantula’ sighting inside the bathroom itself.

By the evening we had arranged some suitable shower arrangements; a local family who lived five minutes away had kindly allowed us use their facilities. They had also let four of the team stay with them in their home. Whilst waiting for our shower we would sit in the courtyard beneath the night sky (where we saw the International Space Station in orbit!) and speak with the children of the village who were quite taken with my camera and smartphone. Discussions with them ranged from aspirations, London and Manchester United, all translated by Navraj, an 11-year-old boy who spoke English at an outstanding level.

We made our way back to camp for an evening of entertainment, kindly arranged by Neeraj to reward us for our hard work. We were treated to music sung by some of the local teens around a campfire under the stars. 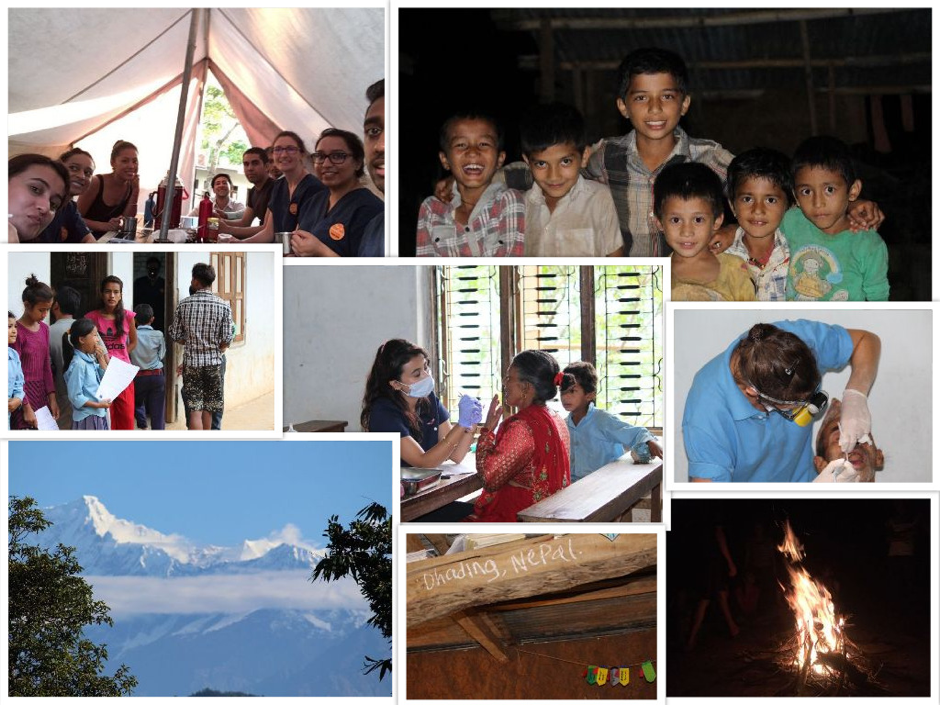 We were joined in the camp by Amrit, Apil and Kaushik, final-year dental students who were to observe the clinics alongside Sishir, Manis and Karun. It was these students who had seen Deepak’s Facebook postings and got Tshrist on board. This had been invaluable as we required a Nepali dentist on board to help with the admin side of things in Nepal whilst we were in the UK. They were inquisitive and helpful and not afraid of the hard work. Without them translating for us, what we achieved would have been impossible; the aftercare advice and the preventative message are just as important, if not more so, than the active treatment.

It was a pleasure to have someone so engaged with what you are doing and reminded me of how much I have learnt simply by observing and asking questions. The Nepali team were also an excellent source of local knowledge and they taught us how their own protocols differ from ours in the UK. For example, no extraction should be undertaken without a prior blood pressure check in those at risk of high blood pressure, which is a common occurrence in Nepal. Eyebrows were raised at our lack of iodine use prior to extractions – another routine procedure in Nepal.

Having spent time in restoratives I was now placed in the Oral Surgery clinic run by Dhruv. The kindness shown by colleagues and sponsors meant we were never without specific instruments and I actually felt rather spoilt for choice. I noted that the patients seemed to require less local anaesthetic (we were using one cartridge per tooth or inferior alveolar block) than they generally do in the UK, where I find many patients requiring a ‘top-up’.

We were making progress with the treatments as the extra manpower in the form of the students, and also the arrival of two of Deepak’s cousins, helped with duties such as cross-infection, registering patients and re-stocking the clinics, which meant that the clinicians were free to treat patients.

School visits also started on this day, with Deepak and Neeraj taking separate classes and teaching the children about the importance of good dietary habits and oral hygiene – messages which will no doubt be passed on to their families. 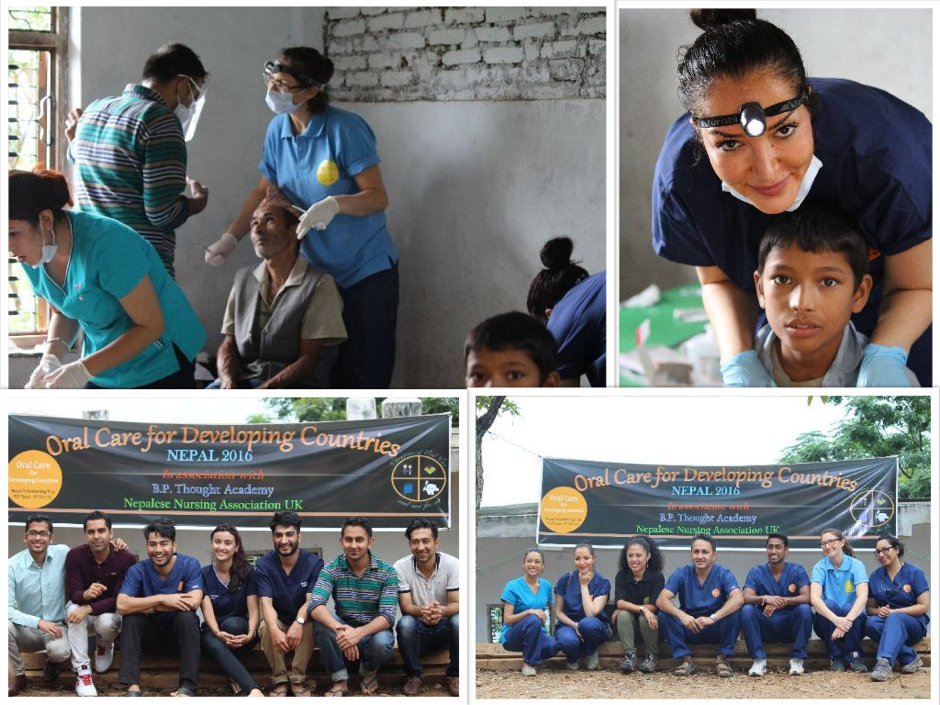 Durga, one of the hygienists, trekked for over two hours, accompanied by a local boy, to reach a nearby school and deliver oral hygiene advice. She crossed a snake en route and found this more disturbing than the encounter with the cockroaches!

As we got further into the week, emotions were running high as we were all getting tired from working well into the evenings. The pressure was on to try and complete treatments now rather then having patients return the next day for outstanding needs.

We saw a few challenging cases on that day. A 19-year-old, heavily pregnant female attended in acute pain and walked for hours to reach us – much to the dismay of other patients she was seen as a matter of urgency and the older women started scolding her. This showed how desperate everyone was to be seen since it was widely know that we coming to the end of the camp.

I was left in charge of oral surgery, assisted by Amrit carrying out extractions into the dark; I was immensely thankful for my loupes. Dhruv and Tshristi had to leave for a nearby domiciliary visit to treat a local man who had been paralysed for 30 years. Dhruv ended up extracting teeth whilst the patient lay on his front (the only position he used whilst using his arms to pull him forward) next to a buffalo(!), which Dhruv later described as a surreal but humbling experience. The family were incredibly grateful to Dhruv and returned him to the camp with fresh buffallo milk for us all.

Chantelle tended to an 8-year-old girl with grossly carious upper central incisors. Her mother was concerned that after extractions she would be left with no front teeth. Chantelle, assisted by Shirin, went about providing some composite restorations – a time-consuming procedure given the facilities available. During treatment the patient became a little shaky and her mother explained that it had been some time since she had eaten. The patient was given some energy snacks that had been brought along for the impending hiking – the patient wouldn’t eat it and was insistent on saving it for her little brother to eat instead and this was quite emotional for all involved to watch.

We had originally planned to depart on this day to set up a camp elsewhere in the region, but due to the bad road conditions this was cancelled. We later heard that 11 people on a bus in that area had met with a fatal accident due to a landslide. This was probably the hardest day we had experienced and that evening we sat in the library discussing the days gone by until the early morning.

This was the last day of treatment for the villagers and the camp was very busy. The school was holding a play to celebrate the end of their term and a lot of the children’s families were on site to watch the play and wanted to make use of the services whilst they were nearby.

The oral surgery clinic was super-saturated trying to complete all the emergency care required; some patients had returned three days in a row in a bid to reach the front of the queue. The restorative department was also extremely busy and we had to extend the workforce in this area in order to get all the children seen. Many had multiple carious lesions requiring restorations. Unfortunately, we had to close the doors before everyone could be seen. This was inevitable but a real shame and we hope that we will return in the future.

We use cookies on our website to give you the most relevant experience by remembering your preferences and repeat visits. By clicking 'Accept', you consent to the use of ALL the cookies. However you may visit Cookie Settings to provide a controlled consent.
Cookie settingsACCEPT
Manage consent

This website uses cookies to improve your experience while you navigate through the website. Out of these cookies, the cookies that are categorized as necessary are stored on your browser as they are essential for the working of basic functionalities of the website. We also use third-party cookies that help us analyze and understand how you use this website. These cookies will be stored in your browser only with your consent. You also have the option to opt-out of these cookies. But opting out of some of these cookies may have an effect on your browsing experience.
Necessary Always Enabled
Necessary cookies are absolutely essential for the website to function properly. These cookies ensure basic functionalities and security features of the website, anonymously.
Functional
Functional cookies help to perform certain functionalities like sharing the content of the website on social media platforms, collect feedbacks, and other third-party features.
Performance
Performance cookies are used to understand and analyze the key performance indexes of the website which helps in delivering a better user experience for the visitors.
Analytics
Analytical cookies are used to understand how visitors interact with the website. These cookies help provide information on metrics the number of visitors, bounce rate, traffic source, etc.
Advertisement
Advertisement cookies are used to provide visitors with relevant ads and marketing campaigns. These cookies track visitors across websites and collect information to provide customized ads.
Save & Accept
Powered by