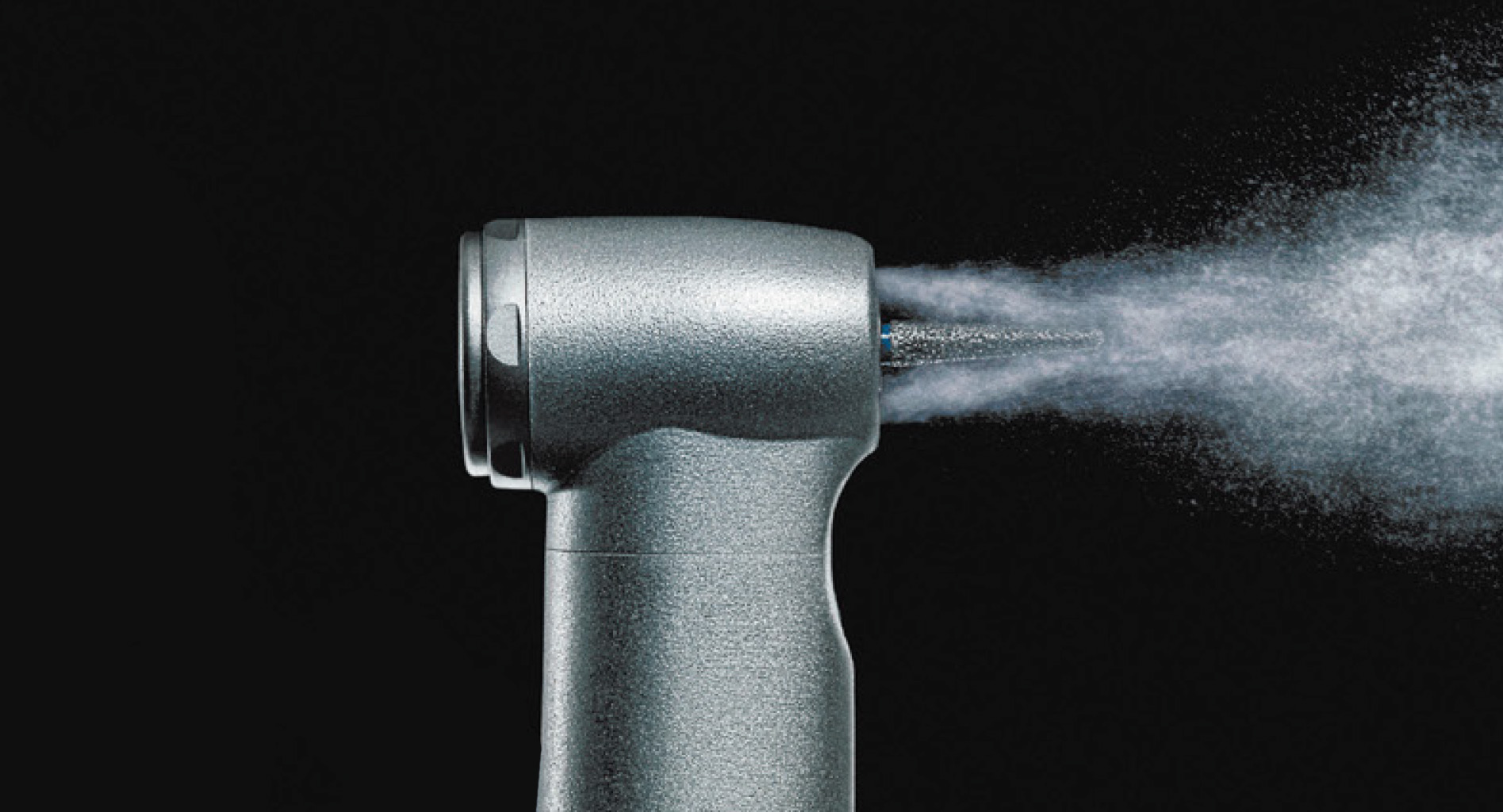 Last month FMC conducted the largest dental handpiece infection control survey ever undertaken. The results are in, and they make compelling reading, highlighting the disparities amongst dental practices in the UK

Handpieces are one of the most used and valuable tools a dentist has. Yet a handpiece is a loaded gun when it comes to infection.

Handpieces are heavily contaminated with saliva, blood products and tissue regularly. It is easy to see the external contamination on a handpiece after surgery, but what is happening on the inside?

Several studies as far back as 2013 have shown that many dental practices are unaware of the risk of contamination and of the correct methods to mitigate the risk. Hundreds of practices took part in an FMC survey sponsored by Aura Infection Control, specialists in dental decontamination products and services.

The survey was also supported by NSK and the Society of British Dental Nurses.

Lifespan of a handpiece

There are a lot of handpieces out there. On average, each practice that took part in the survey had 24 handpieces and each practice had just over four handpieces per dental unit. While some surgeries invested in modern equipment, many have not and were still using old handpieces.

The average age of the oldest handpiece in use was found to be a little over eight years old and many surgeries reported still using handpieces that were over 20 years old.

Alexander Breitenbach, managing director of NSK, said: ‘As long as handpieces are correctly looked after and regularly serviced, they don’t have a limited life. ‘The desire to benefit from new materials and features is the driving factor why anybody would change or upgrade.’

Interestingly, one in 24 respondents had no idea how old their handpieces were. Non-vacuum autoclaves are not designed to process hollow instruments such as handpieces.

Research has shown that the process is ineffective. Manufacturers recommend handpieces are sterilised in vacuum cycles. However, the survey said that a disturbing 40% of practices were using non-vacuum autoclaves.

Aura’s managing director, Laura Edgar said: ‘Things are improving. ‘We have seen a huge increase in demand for our ECPD training on handpiece maintenance.’

Fiona Ellwood, president and executive director of the Society of British Dental Nurses, added: ‘From a patient safety perspective, it is important that structured and time allocated specific training is scheduled and actioned for all team members. It should be part of induction and continued training and, for those undertaking decontamination processes, within decontamination units. It should be part of core learning and part of ECPD.’ 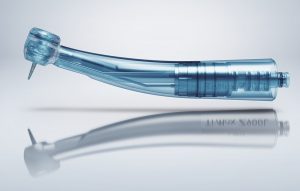 The survey highlighted a huge demand for more information on handpiece cleaning, maintenance and protocols. Almost two thirds of
respondents said they wanted to know more. ‘It’s a really encouraging response,’ said Laura. ‘It confirms what we already knew; that dental professionals care passionately about the health and wellbeing of their patients and when they understand there may be a risk posed by the internal lumens of a handpiece, they want to know how to address it.’

Handpieces should be repaired or serviced depending on the amount of use they get.

‘With the correct care and maintenance procedures in place, handpieces will last until they are mechanically worn and need service,’ said Alex. ‘Premature failure is related to poor and inconsistent care and maintenance procedures, using the wrong cleaning and disinfection agents but also the result of poor quality and/or worn burs. Using incompatible cleaning and disinfection agents can also have a detrimental impact on autoclaves.’

However, the survey showed that on average they are being sent off every two months and three weeks. With the correct care and maintenance, the frequency of handpieces being sent away should lessen.

Again, there was a huge disparity amongst respondents, on this occasion in timescales. Eight per cent of practices were sending their handpieces off monthly and 8% had never sent a handpiece away to be repaired.

One of the most effective ways to clean a handpiece internally is to use a washer-disinfector. Yet only one-third of practices use them. Space and cost have been a factor in the past, but modern design and technology have seen the development of smaller and less expensive models.

An alternative to a washer disinfector would be NSK’s iCare+, which works to the same standard as washer disinfectors but uses chemical rather than a combination of chemical and thermal disinfection. With the process being controlled by the handpiece manufacturer it is fine tuned to maximise the performance and longevity of the handpieces rather than purely compliance with a standard.

Not all handpieces can be processed in washer-disinfectors but those that can benefit from internal and external cleaning and disinfection before sterilisation.

For those that can’t, a manual method using the WL system gives the same level of cleaning and disinfection. NSK iCare+ incorporates the same WI system. 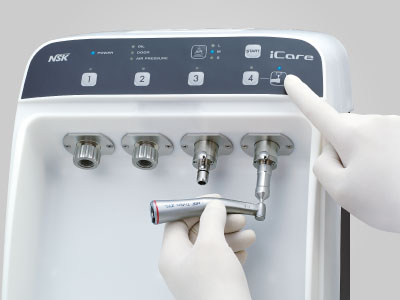 Alex said: ‘Mechanical care and maintenance units like iCare and iCare+ have the big advantage of guaranteeing consistency of the process. Unlike other products in the market, the NSK iCare and iCare+ move the gears of handpieces during the process which makes the procedure more effective.’

The most common method of cleaning a handpiece internally was manual cleaning and disinfection via a pressurised can (not a lubricant) with almost two-thirds of practices using this method. Some practices use more than one method.

We use cookies on our website to give you the most relevant experience by remembering your preferences and repeat visits. By clicking 'Accept', you consent to the use of ALL the cookies. However you may visit Cookie Settings to provide a controlled consent.
Cookie settingsACCEPT
Manage consent

This website uses cookies to improve your experience while you navigate through the website. Out of these cookies, the cookies that are categorized as necessary are stored on your browser as they are essential for the working of basic functionalities of the website. We also use third-party cookies that help us analyze and understand how you use this website. These cookies will be stored in your browser only with your consent. You also have the option to opt-out of these cookies. But opting out of some of these cookies may have an effect on your browsing experience.
Necessary Always Enabled
Necessary cookies are absolutely essential for the website to function properly. These cookies ensure basic functionalities and security features of the website, anonymously.
Functional
Functional cookies help to perform certain functionalities like sharing the content of the website on social media platforms, collect feedbacks, and other third-party features.
Performance
Performance cookies are used to understand and analyze the key performance indexes of the website which helps in delivering a better user experience for the visitors.
Analytics
Analytical cookies are used to understand how visitors interact with the website. These cookies help provide information on metrics the number of visitors, bounce rate, traffic source, etc.
Advertisement
Advertisement cookies are used to provide visitors with relevant ads and marketing campaigns. These cookies track visitors across websites and collect information to provide customized ads.
Save & Accept
Powered by